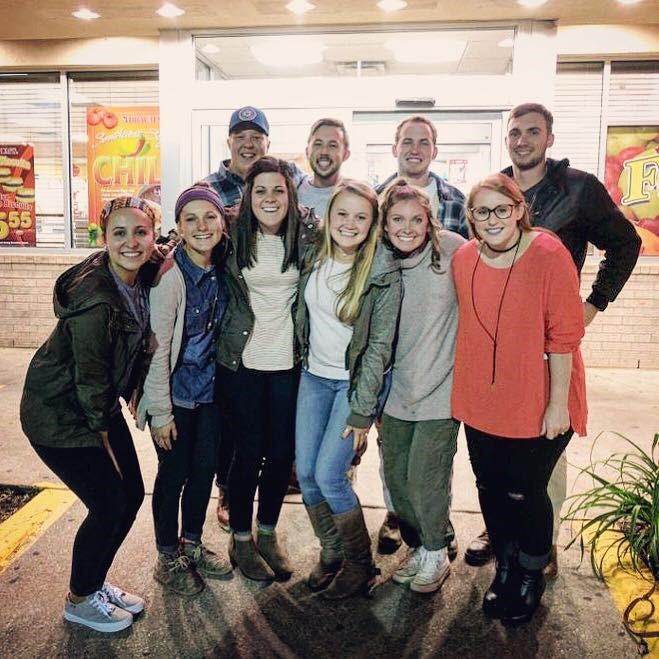 I’m the youngest sibling of two. I just have one older brother, whom I look up to and respect more than maybe he even knows. Naturally, I feel like it’s in the youngest sibling’s blood to have more dependence ingrained in them as opposed to being the oldest. That might just be me. I have a great family of which I am very thankful for. I could and can always trust that they will provide for me. Growing up, I always asked my family what I should do with my life, what career path to take, how to make scrambled eggs (at age 18) etc.. So going to college was a major transition. Nursing school and becoming a nurse was the most difficult thing I have done and the first thing I felt like I accomplished and achieved on my own—literally on my own, though. My prayer life was slim and reading my Bible was almost nonexistent. My excuses were that I always had numerous other things to read, that “I just didn’t have the time” for anything else. The Lord somehow, thankfully, was faithful in helping my defiant and disobedient self get through.

Fast-forward—After a friendship/mentorship ended out of the blue, I started working at Sky Ranch in Summer 2015. I didn’t know what I was getting myself into, but for the first time I felt obedient to a calling to work at a summer camp. An email was sent out to start praying and “Set the Table” for the summer. I knew I was starving for what the church and Biblical community looked like, so that’s when I started fervently praying. And man, did the Lord provide. Abundantly. At the end of the summer, I felt like my time wasn’t done there, but I wasn’t sure how to continue since I was graduating that next year. A week later, a random conversation about applying for the Fellowship (a program for college graduates) occurred—totally the Lord’s handiwork. But I still had some unanswered questions: Why did I fear the future? Why wasn’t my faith stronger?

“By his divine power, God has given us everything we need for living a godly life. We have received all of this by coming to know him, the one who called us to himself by means of his marvelous glory and excellence.” 2 Peter 1:3

After summer 2015, I knew what the church looked like—broken people coming together, not pretending to have it all together; bringing darkness to light, day in and day out; dying to oneself by serving others daily for the sake of the Gospel. So, I was eager to be surrounded by it for a WHOLE year. Thankfully I was obedient, because this has been the best year of my life. Also, the hardest.

The best part of this year is not only being able to serve guests every day out of the week, but the community and the wealth of Biblical knowledge it brings. Having raw, intentional and vulnerable conversations that ultimately bring God glory has quickly become one of my favorite things. Who would’ve thought the introverted me would get hyped up to hanging out in big groups or pumped to go to community nights or reach out and ask for advice??

So, back to the dependency thing…For about the first three months of the fellowship, I took off running seeking out all of the wisdom people at Sky Ranch had to offer. Seeking out wise counsel is not wrong, hear me out! But, the way I went about it was wrong—I would never follow it up with scripture. In turn, the comfort that came from the advice would only last for maybe a couple of days. Then, I’d feel empty. Again, I’d reach out to another person and it would be this constant cycle of fulfillment and then emptiness. I’d never preface the conversation or even follow up the conversation with God—again, prayer life lacking. That was problem number one. Number two had to be pointed out to me—I was not living a life in obedience toward the Lord with the advice given to me.

“But those who obey God’s word truly show how completely they love him. That is how we know we are living in him.” 1 John 2:5

I firmly believe where the Lord prevails and is brought to light the most is also where the enemy knows how to strike you best and put you at your weakest point. And, for me, that’s using other people’s words as my bible. Not being dependent on my managers’ or my mentor’s or my accountability partner’s, or anybody’s words and advice is hard. Because their words are tangible, something I can actually hear and go forth with. Breaking my dependable habits I’ve had for 23 years has been hard. Being pushed to pray, read the whole Bible in nine months and having to seek out the Lord before I approach anyone for advice now is hard. However, being solely dependent upon the Lord has been the most rewarding and refining process (who would’ve thought??). Getting down on your hands and knees to pray to ask for answers about the future, ask for grace and how to live in freedom is one of the coolest things.

I recently heard a quote by John Piper stating, “The heart cannot love what the heart does not know”. I was taken aback…to know and love God is to get on your hands and knees and pray; read your Bible diligently; and seek wise counsel alongside of it all. In short, being obedient is hard. However, even the thought of defeat is from the enemy. I urge you to surround yourself with strong community and accountability who will push you to the cross and seek out His will first.

(PS- I just told my friend this sounded too preachy and I don’t know how to end it, but I think the Lord will be able to use this for His good.)

I pray that you will understand the incredible greatness of God’s power for us who believe him. This is the same mighty power that raised Christ from the dead and seated him in the place of honor at God’s right hand in the heavenly realms. Ephesians 1:19-20